Each of the links below will allow you to download the GPS track from the particular day's ride. Those really interested can analyse speeds, climbs etc. Or just use them to plan your own ride. 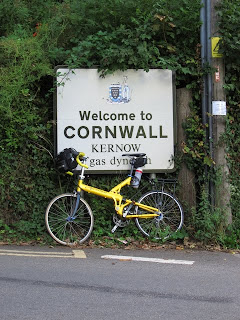 Has that bike got smaller wheels than normal? Yes, they're 24" or 520 size, for which you can get some pretty good HP tyres. The frame is an Airnimal Chameleon which is designed in Cambridge, all welded aluminum alloy. There's about 40mm suspension movement at the rear (elastomeric) and a carbon front fork. The idea is that the bike folds down to airline carry-aboard size with the wheels removed. A pretty compact size is achieved with only the front wheel out. The seatpost comes out and the seatpost tower hinges forward, whilst the handlebars and stem also come off easily.

I wanted to build up the bike myself rather than buy off the shelf so I could decide which components to use. I got started on the idea of using stuff from the Northern hemisphere as much as I could. Not from any particular motivation, given that the frame was built in Taiwan! After a fair amount of research I decided on SRAM Force as the groupset; the quality of this is better than Shimano Ultegra but much lighter. The main deciding factor was the deal I got, it was best VfM  compared to Ultegra, CampagnoloTriple, and SRAM Apex. Anyway turns out the groupset is made in China. So much for the Northern Hemisphere!

Rims came from Velocity (Australia), double butted spokes from Sapim (Belgium) and hubs from Hope (Barnoldswick, England) as did headset and seatclamp.

The bike rides stiff and fast, comparable to a good steel diamond frame (I should know). It is a bit limited on top speed because gearing was selected for hill climbing/touring. I've got a range of 20 gears from 37 to 108 inches. For weight weenies it is not comparable to a carbon frame bike by any means, but I value comfort and durability on long rides. The Chameleon does well on Sustrans type paths too.
Posted by fr333zin at 18:12 No comments:

Well, since we got back home I've had a few questions about the some stuff I didn't really cover in the daily reports on the ride. So I'm going to use a few extra blog posts to explain and leave a record for myself  'cos I'm bound to forget again by next time. (...er... wot do you mean, next time?)

I knew that nutrition would play a large part in the ride since I'd be exerting between (easiest day) 3000 and (hardest days) 6000 additional calories per day, on top of my Basal Metabolic Rate (just means the energy I use each day to exist) which is 1825 calories.

As we all know, the recommended daily allowance for a male adult is 2500 calories, whereas I'd need 2 - 3 times that amount. I also knew that the body can't store much more than about 90 minutes worth of energy in a readily usable form. Whilst this is generally not a problem if you've eaten a meal in the last 3 hours, where and when we'd get to eat was a bit of a lottery. I could have designed a route past a series of cake shops but decided on having supplementary food available instead.

On our last End to End (1998) we pretty much depended on petrol station flapjacks; cheap, plentiful and energy dense. (6000 calories can be quite bulky - choose your foods with care!) As a drawback, they aren't exactly healthy. This time I wanted to be sure my supplements were good quality. After a lot of reading I settled on a daily allowance of 2 x High5 Energy Source drink (180 kcals each), 1 x Torq bar (214 kcals), 1 x High5 Sports Bar (215 kcals), 1 x Clif Shotblox (200 kcals), 2 x High5 Isogel (104 kcals each), and 2 x Torq gels (114 kcals each). In other words the equivalent of a substantial main meal, all derived from fruit/fair trade and organic ingredients. For hydration I chose High5 Zero (think energy drink without no cals) which I carried in a Camelbak Rogue.

As it turned out this was mostly overkill and only on 3 days did I need to eat the whole set of supplements (Inverness - Pitlochry, Pitlochry - Falkirk) and more (Exeter - St Austell).  My favourites worked out to be (in order of priority) Strawberry Yogurt Torq Gel, Sports Bar, Black Cherry Yogurt Torq Gel. However I biased consumption in favour of solids early and only used gels towards the end of the day if I needed them.

I soon tuned in to when food was needed.  I'd find I was thinking about food, or (slightly more desperate) getting a bit of a quiver.  Even worse, slowing down and feeling miserable signalled the need for a solid meal. Whilst in theory you should eat a bite every 20 minutes or so, in practice it depends on the terrain and pace, and I had to re-learn stuff that I used to know whilst cycling regularly and had forgotten.

Recovery didn't get neglected either. I knew that recovery had to start within 30 minutes of finishing each day and I used For Goodness Shakes Vanilla powders, on some days mixing this with the residual Energy Source drink. Most nights I used SIS Nocte Vanilla at bedtime. These are drinks designed to replace essential minerals, as well as replenish carbs.

I suppose I should point out that I'm not a nutritionist.  All I'm saying is this worked for me.
Posted by fr333zin at 18:21 No comments:

Get back on the bike

Day 14 3/4 Colin's Gap
Why didn't I think of this before?  Today we had to fill in the gap that Colin had missed on Sunday between Dobwalls and Roche. Yay, bike ride!  We were away from St Just by 10:00 and dropped off by 11:00 with 16 miles to cover.  And a tailwind, wow. Before long I was up to 30 mph (yes, revved out).  We didn't have to ride all day, so everything went in short of anaerobic effort and it took just 55 minutes to complete. Hardly a noteworthy time, but it seemed good to us as we sat in the cafe waiting to be picked up again.

So there you have it. The fulfilment of a long held goal, done in my own style on a folding bike that I'd built myself. And Colin's too, to complete the ride in his 70s.

Anyone could do the End to End; you don't need to be super fit or fast, but you do need vision and determination. We had both.

Day 14: St Austell to Land's End
It was a real struggle to get out of bed this morning after my 'big' day. With my body being decidedly unco-operative I made it down to breakfast to find out what had happened to Colin. It seems he had made it to the far side of Liskeard by late evening and been picked up by Margaret. In discussion we decided to spend today riding to Land's End and for him to use the spare day tomorrow to ride the 20 mile 'gap'.

Great plan but I was hardly awake so we didn't set off until 10:00. We decided to head for the A30 in order to make best progress South-West. But which way to go? Bing was still convinced that the hotel was in central St Austell, so we asked a local chap for directions. So it was that we set off for Roche and the Goss Moor Trail which is actually the old A30, and the scene of my puncture. It seems puncture-resistant tyres are not proof against a 20mm roofing nail (imagine that).

At Fraddon we got onto the new A30, but I seemed to have no energy and could barely maintain 15mph on what was essentially a flattish route. The idea of getting on the A30 had been to pick up speed and make good progress. I put this down to the efforts of the day before and plodded on as well as I could. Eventually we got to Hayle and decided to stop for coffee. Where I discovered that the back brake had been binding since I'd mended the puncture 25 miles beforehand! Strangely, after drinking some coffee I was back to my old self again.

Eventually we got to Penzance and the final 10 miles to Land's End passed very quickly. By 16:30 I was leaning against the railings of the Marker Post, strangely deflated. What was I going to do tomorrow?